Most will know by now that the Original Lode Runner Online: The Mad Monks' Revenge works well under Windows 10 with the exception of the file dialog not having a box to enter a puzzle. You can read all about it on the Windows 10 support post.

With the Anniversary Update comes a few quirks. These appear to only affect some computers. All of the bugs below happen on my machine but not all on my brothers machine.

You can still download the patched installer from Caleb on his FireYour.it blog.

There is a bug that shows the error "Invalid Lode Runner level group version - unable to load" whenever you type a file into the file name box. It doesn't matter if the puzzle was made in the Original, LodeEdit or this remake.

The filename box is missing on the save dialog in the editor and also appears a little mangled. The extension dropdown is partly shown in the middle of the bottom border and there are some white lines around the resizing grip in the bottom corner. Puzzles do appear to save and can be loaded again (with the above caveat) but you'll need to use the right+click menu to copy, paste and rename the puzzle and then overwrite it. 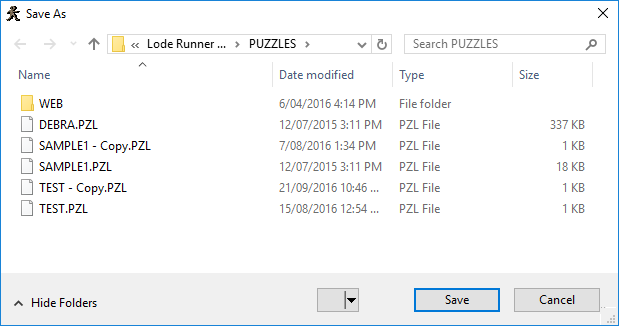 Saving a puzzle set in the editor