Welcome to 2016! Lots of bugs were fixed this week, the in-game menu was finally added, cut-scenes checked off and all of the data files shuffled about. Overall, a very productive start to the new year.

Again, most of my time was spent finishing the last of the AVI cut-scenes - the MMR bonus ending. The entire process was rather time consuming but overall, I'm very pleased with how it all went.

Jeffrey pointed out to me that this rewrite didn't follow all the big/boss bomb rules of the original. If you look at
Jason Summer's Lode Runner Archive, and the section on big bombs and rope traps;

Large bombs destroy objects within 2 tiles of them, except for set snares, which they destroy within 3 tiles

I'm not quite sure why Presage would have put this into the game. It is quite odd when you think about it. Nonetheless, I've added it to the game.

Also, thanks to Jeffrey for testing some puzzles made with Jim Winkler's Lode Runner Hacker's Editor to see if they work. The good news is, most things will work such as gold on entries/exits, exits on start positions. 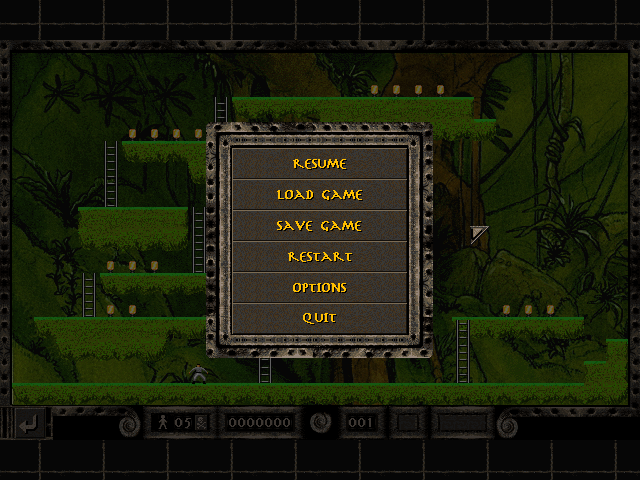 As you can see in the image above, I've finally got the old OS file strip replaced. I know it's been on the cards for quite a few months but I kept putting it off thinking it would take too long. As with most things, it took only an hour or so as all of the code for the actions was already in and working.

By now, the keen observer would have observed the plethora of options the old menu had that my new one doesn't.
All of these options are still available by clicking on the new cheating hotspots (lives, scores, and puzzle number), the options dialog (which was only accessible in the original via the main menu) or by using the keyboard shortcuts.