Thanks to Howie this week for helping to iron out the kinks with the new build tool on Linux machines and for Miguel for helping to track why the game crashed when it was unloading, again, on Linux machines. This bug turned out to be a logic flaw on my part and the differences in .NET Framework versions between Windows and Linux/macOS.

LAN gaming is currently unavailable. I've no ETA at the moment on when it will be ready, sorry.

The build tool is just a basic console app which copies all the game files and binaries for each platform and then zips them. The previous tool was written in Visual Basic some time ago and wasn't very well done. It has been rewritten in C# to use XML manifest files and is no longer dependent on hardcoded paths and filenames. 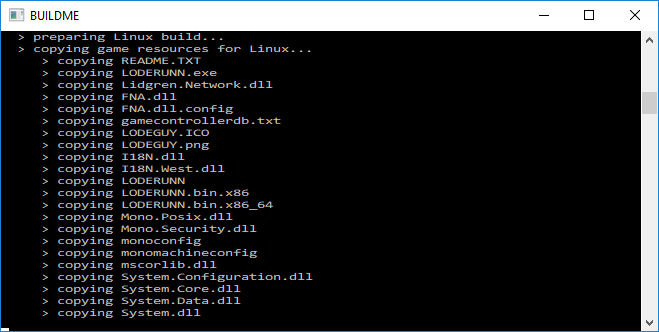 I've made sure logs are now UTF-8 encoded to try and fix the problem you see in the screenshot below. The top extract is from the error reading tool, middle from Notepad++ and the bottom from Notepad. Notice how the part in red is backwards? What is really bizarre is if you copy the text and paste it again, it is no longer reversed.