Similar to the previous 3-part series on converting the original AVI cut-scenes (Astral, Reef, post-credits) to the propriety Presage format, this post goes into some detail on how I modified the post-game credits.

What was wrong with the credits before? Quite a few things, nothing major, but a few that have always stood out as a little odd to me. This has been on my TODO list for some time but I've always put it off since past experience creating cut-scenes was very time consuming. When going into this part of the project I thought to myself "this will be a lot quicker since I'm not creating a whole scene from scratch." Naturally, I was totally wrong - modifying the credits took just as long.

Odd things in the credits

The first thing that stands straight out is the massive gap at the top of the lift/stairwell structure. Surely I'm not the only MMR fan who has noticed this? 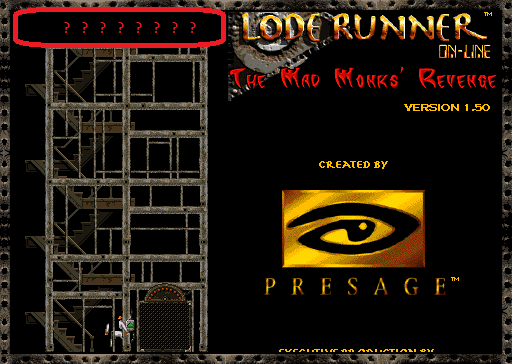 Why is this area blank?

The next thing is Jake popping in and out over the structure. This appears to be a layering bug when creating the Original cut-scene. The same thing happens after the lift cables snap. You can see the cable somehow pops over and behind some beams.

Lastly, why does the cut-scene end with Jake stopping well before the top of the stairwell? The post-credits scene has him popping into the Mad Monks' Control Room but you don't see any doorways or levels leading off the stairwell. You might also have noticed that Jake doesn't climb the last flight the same as the others.

The gap at the top is the main issue I have. The others I can live with but if I'm going to go through all the effort I may as well fix them while I'm at it.

What to place in the gap?

Only 3 possible solutions come to mind which you can see below in my MS Paint mockups: 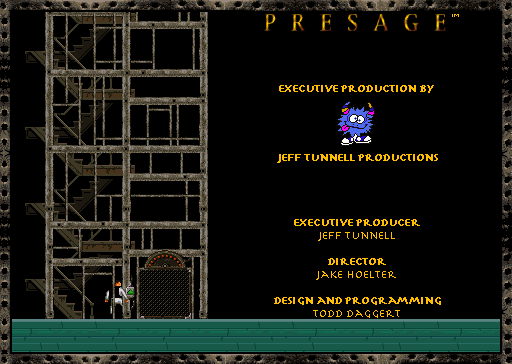 1) Add the platforms from the Reef World cut-scene 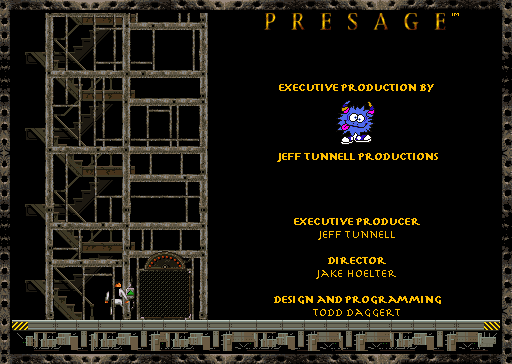 2) Add the platforms from the Industrial World cut-scene 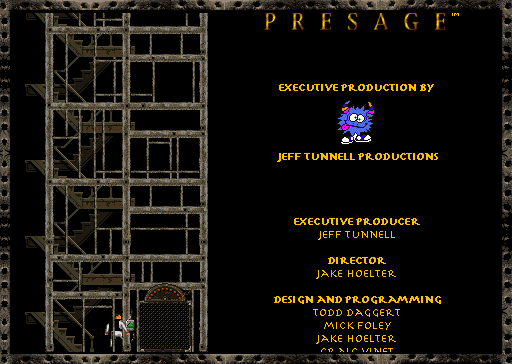 3) Extend the stairwell and lift shaft

As it turns out, the gap at the top of the lift shaft is the same as a platform from the other cut-scenes. Is this a coincidence? Since the last puzzle in the game played was the Reef World I moved the content up and placed the platforms from its cut-scene. The result is a little odd since the graphic style of the structure doesn't match that of Reef World (image #1).

The Industrial World cut-scene has the same art style as the lift structure. Swapping the Reef World platforms for Industrial made a massive difference, but, like the last mockup, I didn't like the way the credit roll comes across as being squished in with the main focus on Jake - these are the people who made the game and they deserve the gamer's full attention.

The only option left: raise the entire lift structure to fill the gap. Extending the structure also entails adding more sprites + extending the cables for the lift. Doing this will cause the entire video file to be thrown out = each frame in the movie will need to be adjusted. This basically equates to creating a whole new cut-scene from scratch.

The post-game credit cut-scene is made up of three movies. The last taking up the most amount of space. With nothing wrong with part A and only one slight layering issue to fix in part B, the majority of my time was spent altering part C. The only issue the cut-scene coming in at just over 500kb! This made the credits the largest video by well over 50%. It may seem complex, but if you ignore the credit roll (which isn't a part of the movie), not a lot is happening.

Being very OCD with MMR, this wasn't acceptable

What I did next was to rebuild the lift sprites since these accounted for about 70% of the size of part C. I removed the last flight of stairs from the animation and copied the first lot and adjusted their position. After that, it was just a matter of merging the three parts together.

The credits were the largest of any cut-scene by far. I'm very happy that I've halved the size of them + merged them into the one. You may notice too that I've added two little extras; whenever Jake Peril presses the lift button you see a slight glow of the button and the credits pause.

I'm happy that the focus of the scene still remains on all the people who worked on making Lode Runner Online: The Mad Monks' Revenge.