The Xbox Lode Runner doesn't have exit ladders, instead it has exit phase blocks that either phase in or out once when you complete the level. I liked the idea so I've added it to Lode Runner Online: The Mad Monks' Revenge rewrite.

The shot below indicates the phase blocks and is of level 2, stage 2 (ruins) which was taken from this YouTube video. 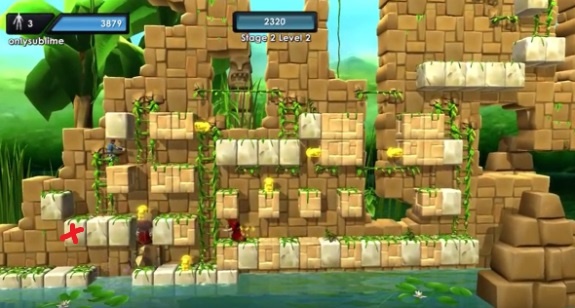 Below is a recreation of the same puzzle. I had to make one modification in the centre since Lode Runner Online: The Mad Monks' Revenge doesn't support gold hanging from the side of blocks. Two things are very obvious when you see the games side-by-side; how pretty the Xbox version is and how small the puzzles are. I'm not sure why they are small - pretty much the whole game hasn't any puzzles much larger than this one.

Granted, the video isn't spectacular but you get the idea. Puzzle designers can go crazy - use the exit phase to reveal a path to a door or throw up some blocks to make the puzzle harder to escape from.