One of the main issues with the monk AI was them ignoring Wes Reckless. In a very early build, monks did chase the hero that was closest by "drawing" a line between the monk and each hero and going for the one that was closest. This was not accurate as it did not take into consideration a hero being unreachable or the oddness of monks. I forced monks to chase Jake and put this part of monks on the backburner until now.

I spent quite a lot of time trying to work out what the original does and the original is by far perfect. Sometimes a monk will chase Jake when Wes is closer or vice versa or get stuck and not know what to do. I think I have replicated the original behaviour as close I can.
How it works;

Like I said, this method may not be bang-on to the original but without the source code, I can only play for hours and try to work out how the monks choose their food.

The orange tick is who the monk wants to eat

A toggle was added to allow you to turn on 'Quirks Mode' and alter the game language. The language is just a place-holder for the time being. The joystick icon has been replaced with a controller icon, the revert and swap controls have both been re-coloured and re-shadowed. 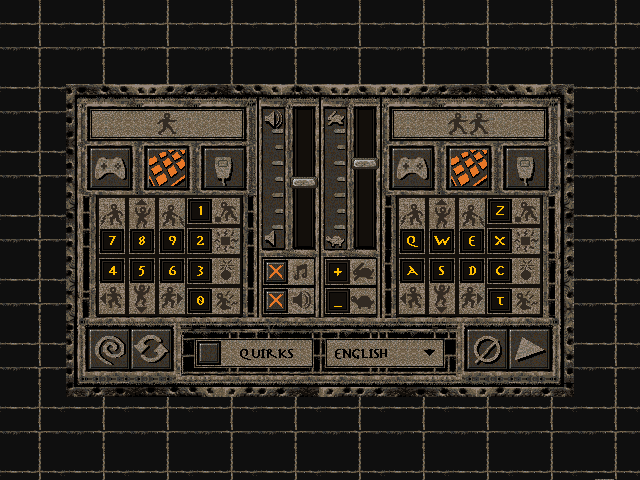 Also new this week is the single/two-player dialog which you can see in the video below. Why a new dialog? There are a couple of things that I don't like with the originals;

The main part is it takes too many clicks to view a puzzle you'd like to play. I'm sure I'm not the only one that when they have 30 minutes to spare, crank up MMR and pick a random puzzle and play from there. The main focus now of the new dialog is to make it easier to see and choose what puzzle you'd like to play. The only thing missing is the name of the puzzle set as it is not really needed.

Remember, this dialog doesn't have to be permanent - if people don't like it then it will be dropped in favour of the original. Both are in the game side-by-side at the moment. If you love it or hate it, let me know!