Not a lot was done this with week on paper. Mainly play testing and some time-consuming tasks. I also upgraded my Windows 8.1 Z1 machine to Windows 10 which ate some of the day away.

The July update is now available. Please head over to the downloads page if you haven't already done so and give it a try. You can read a summary of all the fixes and features in the July update here.

Sample text on the RIGHT and creation on the LEFT

The main game font has no other accompanying files or data with it that specifies character spacing, offsets, sizes, etc. It took a very long time originally to get all this information. A lot of print+screening was used but the end result works well. I've been converting this over to the same format used by the 'Arial' tooltip font. Why have two fonts with two different ways of loading them? 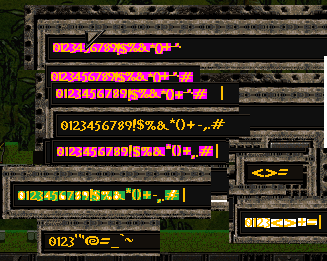 Making sure each character's spacing matches