Overall, quite a lot was done. Nothing major (apart from AI) was done to the core code-base, but I'm still happy with what we've achieved. The game is slowly coming together!

In case anyone had ever thought "I wonder what kind of source control they use?", the answer is none. I thought about using Visual Studio Online but, to be honest, was a little overwhelmed with it. I'm sure it isn't too hard to use (I thought Microsoft Azure was extremely perplexing until I suddenly got the hang of it) but I don't really have the time. GitHub is also not my forte.

What we do is simple;

*Here we have a Monk looking for a spot of lunch*

Gareth is currently working on is improving the night-time mode for two-player puzzles. You may have noticed that there isn't actually a darkness mode for two-players which is a little bit of a shame really. Here is a mock-up in MS Paint.
More detail of this will be covered in the next "Same, but different post". 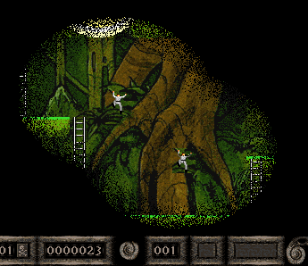 A small mod to BufferedReadStream.cs was needed to support streaming from the Presage resource files where all the original music calls home.