I'm happy to report that network gaming is complete. And when I say "complete", I mean the actual playing of games. Obviously, some more fine tuning is required such as out of sync checks, better disconnection detection and a lobby needs to be added (and will be shortly).

The rest of my time this week went into making slight improvements here and there and fixing bugs that popped up. One thing fellow project tester Leandro discovered was a flaw in the original - and this project. If you look at the picture of the 1st puzzle below, you can see I've got 768 points. I did that without cheating. Collect all the gold but don't exit the puzzle, save and reload the game. Rinse and repeat.

This isn't really a bug, just something that the original programmers never thought of and didn't take into consideration. Not everyone plays for points but some do and it isn't fair on them if it is easy to manipulate the game to get on top of the scoreboard. This Lode Runner Online: The Mad Monks' Revenge fixes this bug to make the game fair. 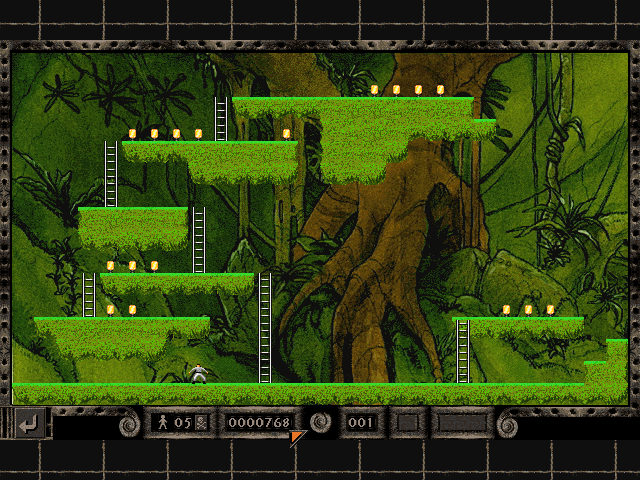 The monk on the left aborting his climb

You're probably thinking "bandwidth saving...what's that about for LAN?" and you'd be right but I figure that the only difference between a LAN game and an internet game is the internet. The internet does need bandwidth measures. Why not do it now and be done with was my philosophy.

Saving network games has been added. Games can be saved in two ways; manually save the game by clicking the back button (until a proper in-game menu is added) or if the game drops out for any reason. If the host of the game exits unexpectedly, then the client(s) will save the game and a copy of the puzzle. The same goes for the host if a client(s) drops out.

This means either the original host or any of the clients can resume a game later on if they choose to instead of the host and without the use of online storage (read: "cloud" if you are under the age of 30). Clients will save a copy of the puzzle in the PUZZLES\WEB folder.