If someone asked me what I thought the trickiest part of this Lode Runner Online: The Mad Monks' Revenge remake has been, I'd say figuring out the Presage resources, followed by collision detection. After that, I'd say it was the monks.

The main part that gets me with monks is what I call "hump 'n bump" or "catch and release policy". Without the Secret Sauce (get it, 'source'), I've got to record hundreds of videos of the Original and try to replicate as best as I can. While the "hump 'n bump" code is quite complex, I like to think that the game is very sympathetic to the Original.

It also appears the last months' massive editor overhaul was not friendly towards regions. Quite a few bugs popped up (all fixed) and they all came down to not enough testing on my part. Sorry for that.

I've decided to update all the builds you won't have to wait another month for the fixes. Head over to the downloads page and get the update.

Flipping support was added to the editor in June last year. You can read about here in the Cut/copy/paste + now with flipping support post. Until now, you could only use the shortcuts but it is nice to have UI elements to go along with the cut/copy/paste buttons. The other change to the toolbox is the undo and select region buttons: I've moved undo up so all the region manipulation tools are grouped together.

Flip horizontally and vertically now on the toolbox

Changes to monk AI is an ongoing process but it shouldn't stop any puzzles from being able to be solved. If of course you find a problem, just let me know. 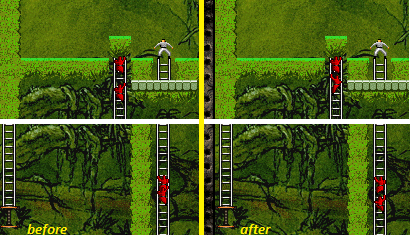 Monks no longer get cramped on ladders

Running through a wall