We often get emails asking to add new features, tweaks, or content to this re-write of Lode Runner Online: The Mad Monks' Revenge and we happily welcome them!

Below you'll find a sum up of what's been added that's been asked for but if you've got an idea, feel free to send it in.
That said, ideas still need to meet the following:

Keep in mind that this is a hobby project and time is limited so if your idea makes the cut, you might not see it for some time.

Here's a list of whats been added so far or is in the progress of being added:

This one was added early on and was requested by Adam. Handy if your left hand works better than your right or you're playing on a PC without a numpad (Mac Book) and you want to quickly swap the default over and just play. 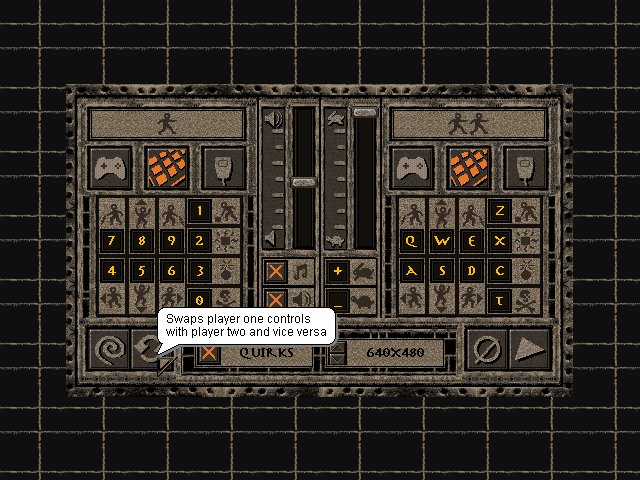 Several readers of this blog had expressed concerns that I had considered the bugs Lode Runner Online has as just bugs and simply didn't write them into this project but many players actually built puzzles that exploited them which would have made them unplayable. A Quirks Mode was added that now allows all of the listed known bugs to be added in.

Requested by many over the last year or so and has finally made it into the March build which is up for grabs now.
You can select an available 4:3 screen resolution via the options dialog and the game will be scaled to fit your monitor.
If you have a GPU that doesn't support this without looking odd, try setting <ForcePillarBoxes>true</ForcePillarBoxes> in the config file to add the old style pillar boxes back.
As before, ALT + ENTER will toggle between windowed and fullscreen.

Requested by Jared since Chromebooks don't have function keys, using shortcuts that require them are impossible. To fix this, a <RemoveFKey>true</RemoveFKey> setting has been added to the config file that allows you to simply press CTRL along with the desired numeric key instead. For example, CTRL + F5 to collect all gold (when cheating) can now be used by CTRL + 5.
Since this only affects Chromebooks or strange keyboards, I've decided against adding the option to a more accessible location such as the options dialog.

Lavi's idea allows you to set teleports that only monks can use. Useful to take advantage of the AI to herd them to collect gold that you can't reach. Like regular teleports, monks won't actively seek them out.

The editor always let you add a blank puzzle to a set, but what if you wanted to combine multiple sets together?
You'd have to open set #1, copy the puzzle, open set #1, paste the puzzle. Rinse and repeat. Rick's idea means you can combine sets into the one with a click of a button.

Jared's suggestion is actually quite handy considering the mouse isn't needed for gameplay and your hands usually stay on the keyboard the whole time!