This week was spent adding save game support and fixing some of the issues that have been hanging around for a while. Unfortunately, I've hit a dead-end with the original save game format. It is clearly encrypted and will have to stay that way. In its place I've made a new format that works the same. I plan to add tracking to the saved games later on to show you your most used tool, monks you've killed, how long you've played, and that sort of thing.

The mad monks got some time spent on them too. YOG monk control mode was fixed, better gold stealing/dropping code and some blasting issues with monks falling into a hole. Monks still need some more work, but I think they are getting close to being in par with the original.

Remember to check back on Tuesday the 29th for the updated September build.

Previously on the LEFT and current/original on the RIGHT

*Monks stealing gold over and over* 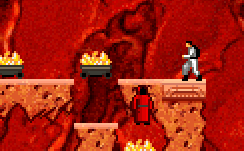 This should no longer happen