I've slacked off on doing any meaningful work on network games this past month in order to focus on other areas of the project. That, and to be honest, I wasn't "feeling it". This week though I spent most of my time on LAN games. You should now be able to hold a network game without getting out of sync and without each machine ending up doing their own thing.

Mouse control was added this week. This was one of those things I've been putting off and putting off. This week I thought "why not?" so I did. Mouse support is now in and working and it turns out it was also one of those things that takes a few hours including testing. I've made some changes to how it works compared to the original to improve it a little.

Remember, the October build is up for download on the downloads page. Go and download it if you haven't yet (why not?). The October has 100+ updates, fixes and improvements. You can read the complete monthly roundup here (including this week).

More keys were added to the keyboard key bindings. This does differ from the original with some keys but does allow you to use more of the keyboard. The shift keys should point upwards but an extra arrow indicating left or right looks a little confusing. You can now use the following keys in the game;

Interesting tidbit: the page up/down, home, end, insert, delete came from The Legend Returns resources since for some reason Lode Runner Online doesn't have these. I added the arrows to the CTRL and ALT keys. 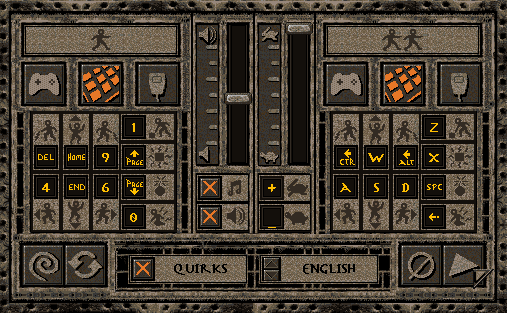