We've received quite a few questions over the last several months as more and more people find this project. One of the more popular ones is if we are going to update Lode Runner 2 when we're finally done with Lode Runner Online: The Mad Monks' Revenge... 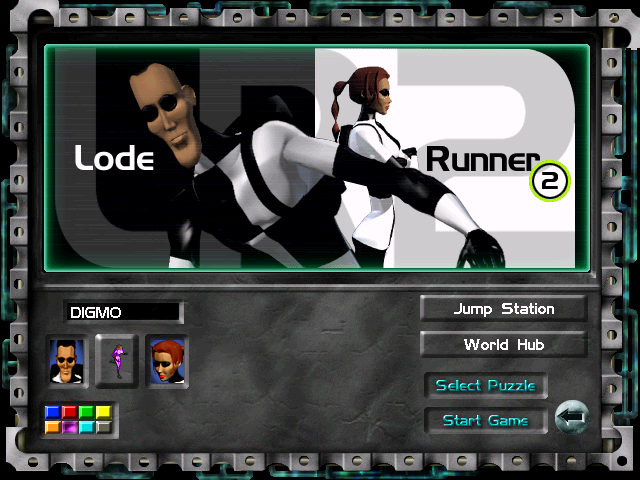 BEFORE YOU GET EXCITED!!!

I'm not confirming if we are going to do the aforementioned update - we simply haven't decided what's next for us. Having not played LR2 for well over 10 years, I thought I'd dust off my old CD and give it a go. Here you'll find my experience and some ponderings on what could be.

Some of these points might sound nit-picky but most are just things I'd forgotten about. I've split them up into the familiar weekly post categories of general, editor, and game.

I tried to just play it for fun and for a trip down memory lane but I couldn't stop myself from thinking about all the little things I would tweak. Not for the sake of it, but like what we did for MMR - remove the old and clunky feel but also keep it looking and playing the same as it did 20 years ago.

You've taken so long doing MMR, will I still be alive?!?

That's a fair point, we have taken over 3 years now. I think that's a pretty good effort considering we aren't programmers by trade and did not start out working on it solidly.
If we were to proceed with LR2, much of the code from MMR could be reused. Things like content handling, animation setup & playing, user interface, and networking would greatly reduce the development time as what we've written so far can easily be adapted to any game.

From my brief playing, I don't think there would be anything too difficult. Unlike before, the movement is grid based so getting a pixel perfect match won't be completely necessary.

For those of you who want to poke about in the resources, Anthony Kozar & Toastline have already done so and published their findings.

Playing Lode Runner 2 again was quite fun and I think re-creating it would be just as much fun too. We are currently adding a marketplace to The Mad Monks' Revenge and have yet to add the actual 'Online' component so we still have several months of work to go.

The Magic 8-ball on my desk is giving the very non-committal "Ask again later"...